Another Shift, Another Working Fire 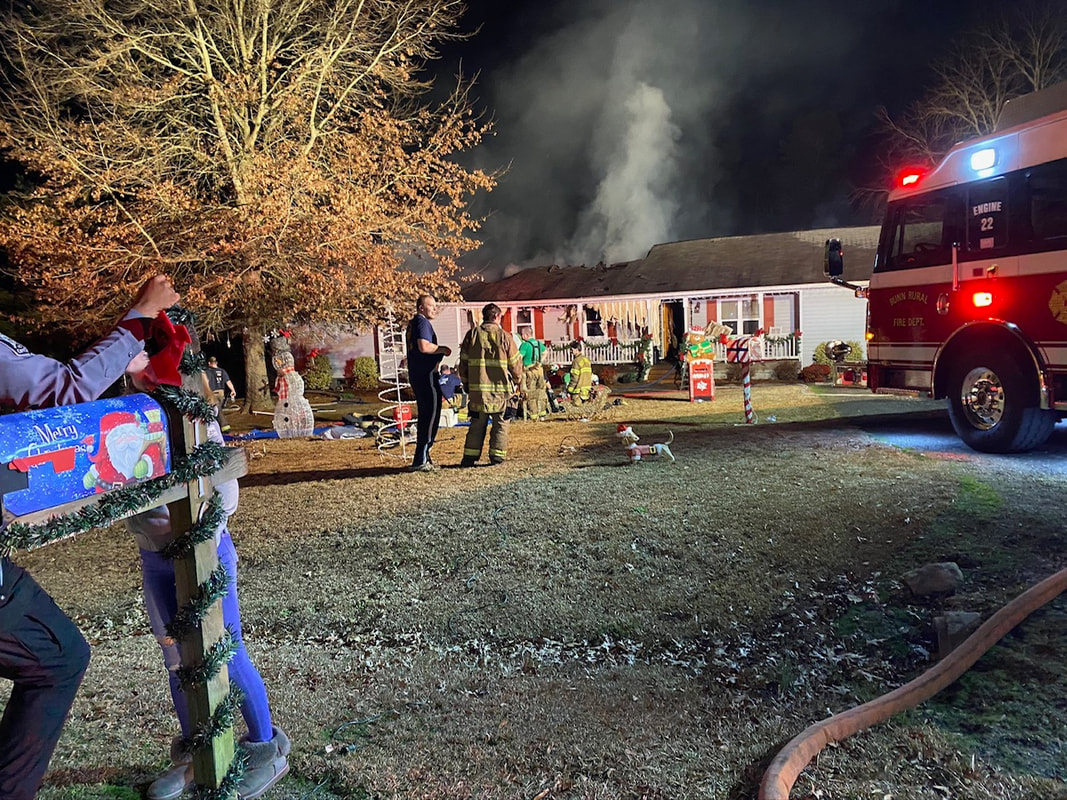 https://www.gofundme.com/f/alexiss-hospital-bills
​
Working House Fire in Franklinton
​
Engine 41 responded mutual aid to Franklinton on this working house fire on December 12, 2019. Upon arrival, Engine 41 assisted with fire attack and conducted a primary search before opening up the ceiling and walls for fire attack. 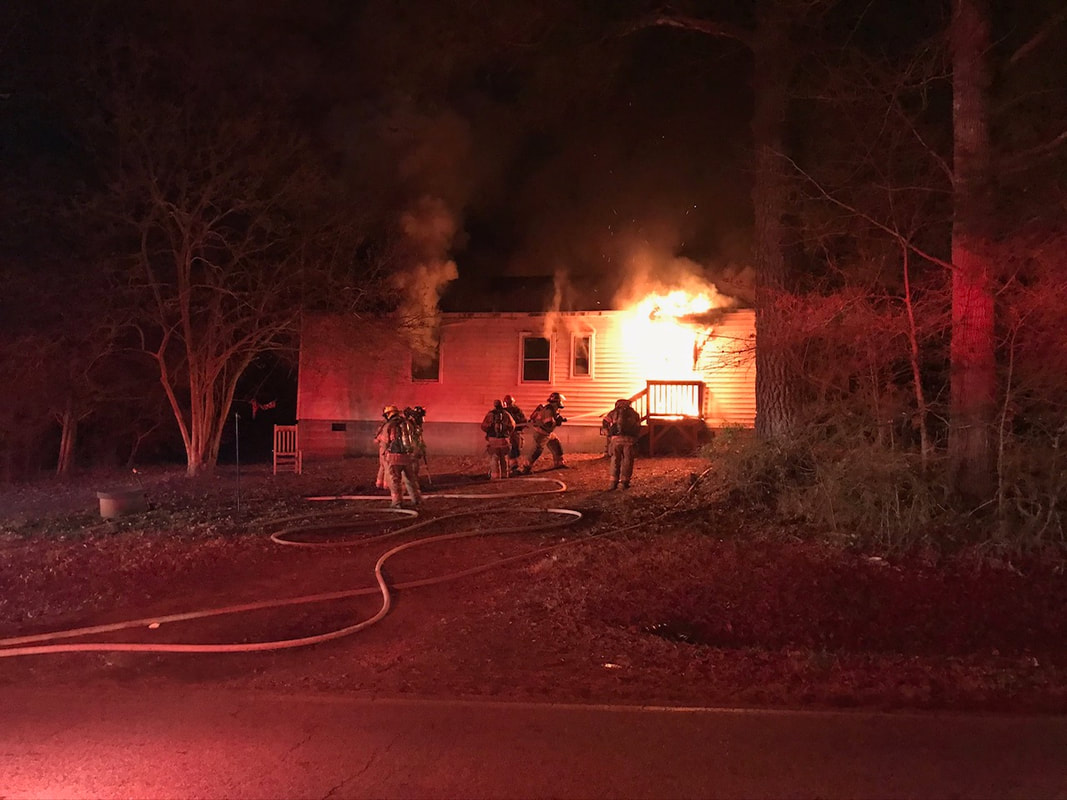 Live Burn Training
​
YFD hosted this live burn training on an acquired structure on November 23, 2019. Training with real fire in an acquired structure provides priceless training to our firefighters. If you have a building that you would like to donate for live fire training, please contact Assistant Chief Justin Graney at jgraney@yvfd.com. 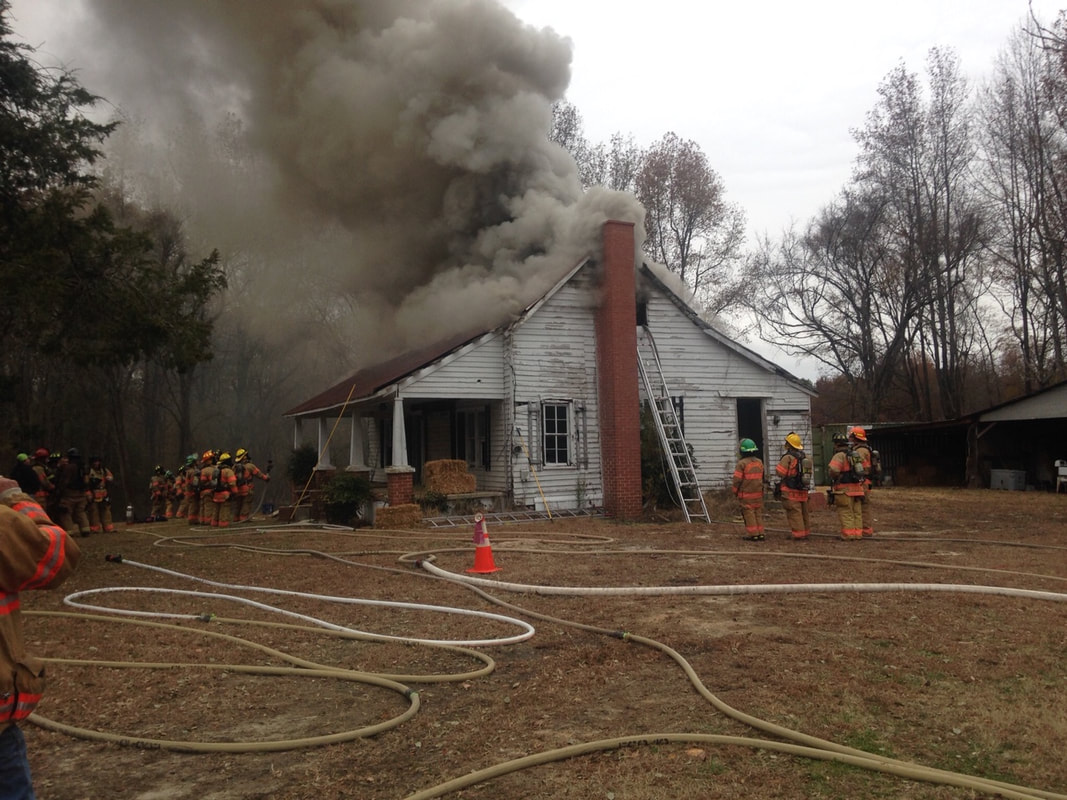 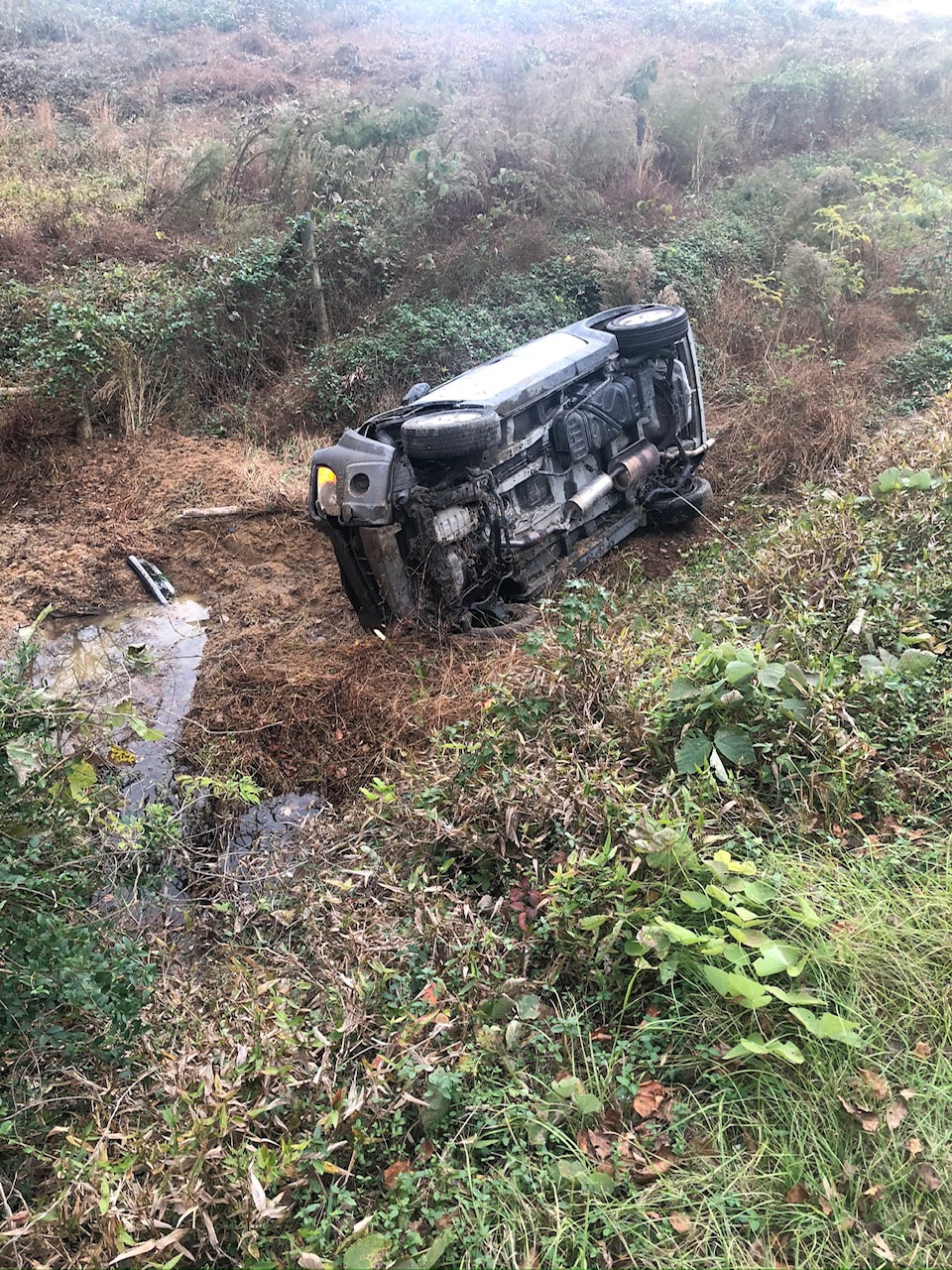 Engine 41,  Engine 241, and Squad 45 responded to this head on collision at US 401 Highway South at Fox Ridge Road on November 2nd, 2019. All occupants were treated by Franklin County EMS and the fire was quickly extinguished.
Downtown Youngsville Trick-or-Treat Festivities 2019

The Youngsville Fire Department was proud to be a part of the downtown Youngsville Trick-or-Treat festivities on Halloween 2019!  Lots of kids stopped by and we enjoyed sharing goodies and fire safety information!
YFD to offer FREE CPR Course - Nov 16th 9a-12p

The Youngsville Fire Department is proud to offer a "lay person" CPR course at Station #1 Nov. 16th 2019 from 9a-12p.  The course is FREE and all are invited.  Knowledge of CPR truly saves lives! 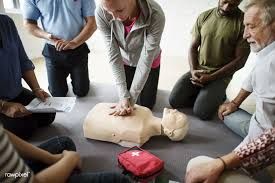 Youngsville Fire Battalion Chief A.C. Rich was installed on 8/24/19 as the State President of the North Carolina State Firefighters Association at the annual banquet in downtown Raleigh. Chief Rich is a visionary leader that continues to represent Youngsville at the highest level and will undoubtedly do a fantastic job serving the firefighters of North Carolina.

Please take precautions and keep yourself and family safe during these these hot days.

Heat is the #1 weather-related killer in the United States! Here are a few tips on staying safe during episodes of dangerously hot weather: 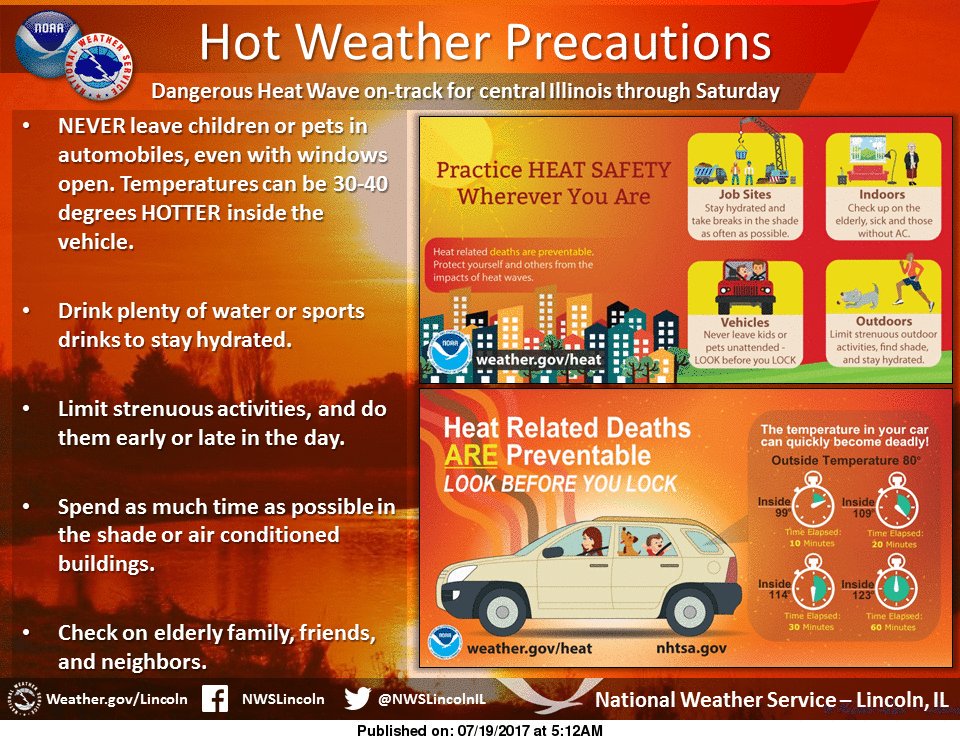 Night on the Town

Youngsville Engine 41 and Ladder 4's crew took advantage of the warm evening on July 14, 2019 and visited downtown Youngsville for some ice cream and to spend time with the community. If you see us around town, please say hello! 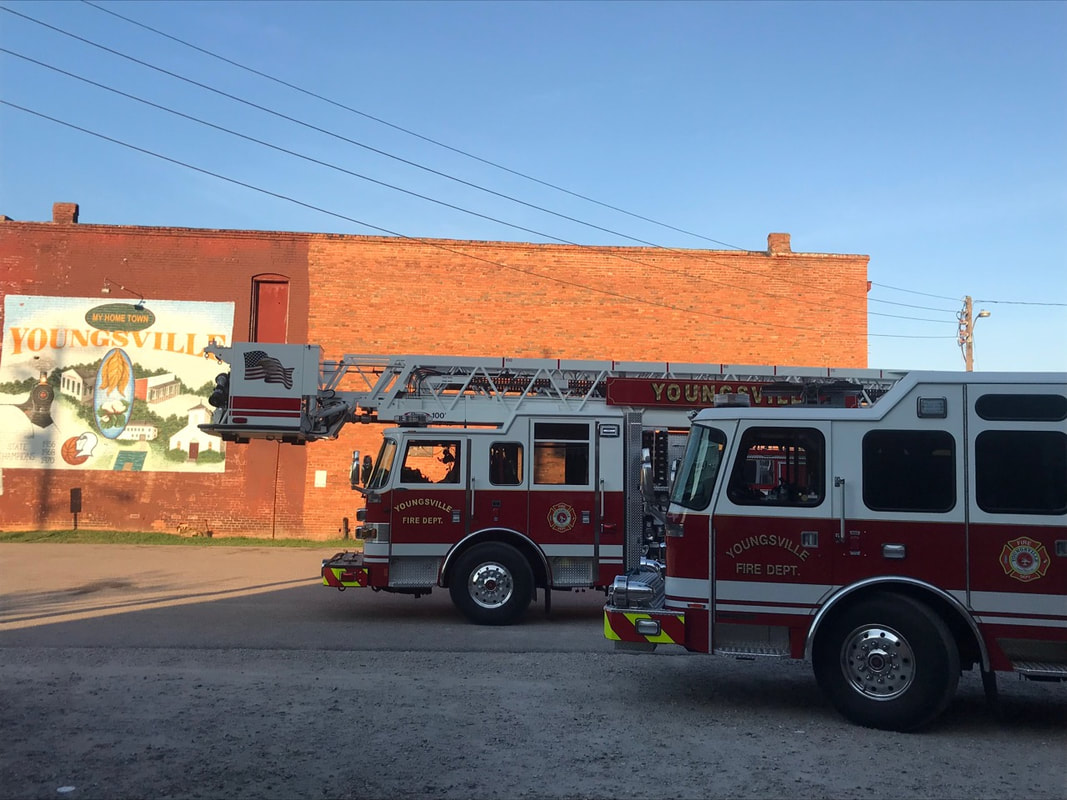 Youngsville Engine 41, Engine 241, and Bunn Engine 22 responded to a mobile home fire on Hidden Stream Way in the Moores Pond Community of Youngsville on July 10, 2019. Engine 41 arrived on scene with smoke showing. Once interior, crews found a bathroom on fire from an apparent short circuit in an exhaust fan. Fire was contained to the bathroom.
Dump Truck Overturns

Youngsville Fire responded to this dump truck that overturned on NC 96 Highway West on June 23, 2019. The driver was treated for minor injuries by Franklin County EMS. 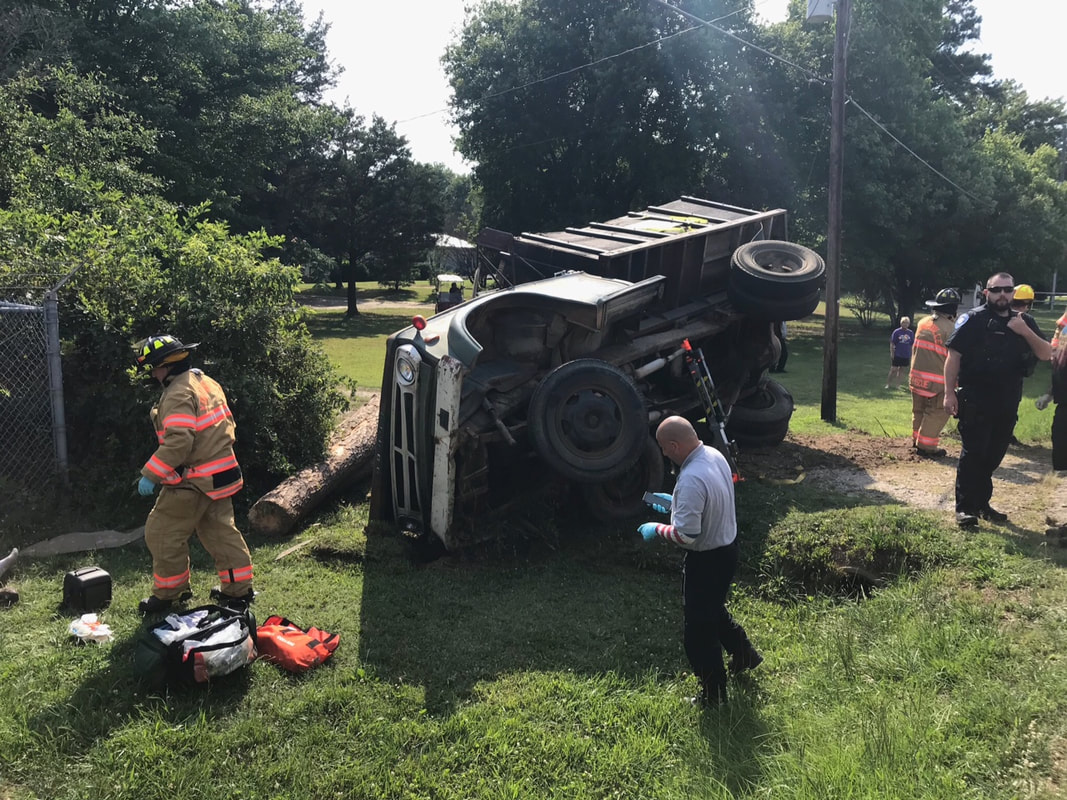 Youngsville Fire responded to over 20 incidents on 6/8/19 due to over 7 inches of rain falling in under 5 hours. Several roadways were washed out and several homes were flooded or were surrounded by water. Citizens are reminded to not to drive through flood waters. Turn around, don't drown.

*Aerial Photos of US 401 Highway are courtesy of Vert Images.
Installation Ceremony 2019

Youngsville Fire held the fourth annual Installation Ceremony on April 13, 2019. The event featured an address from Mayor Fonzie Flowers, a keynote from Deputy Director Derrick Clouston of the North Carolina Office of State Fire Marshal, the swearing in of the class of 2019 officers and newly promoted firefighters (the Installation), and various awards. The department proudly celebrated two life saves in 2018 and the successful administration of the third annual Youngsville Fire School which is a basics and recruit school for all new members. The Justin H. Lloyd Fire Chief's Award was presented to Captain Garrett Jackson for his work to progress the Training Division and his hard work on the Youngsville Fire School development. The Career Firefighter of the Year was awarded to Fire Department Administrator Glenn Evans who consistently goes above and beyond the call of duty. The Jeff L. Fields Volunteer Firefighter of the Year Award was given to Assistant Fire Chief Justin Graney.

The video is of the Wake District Pipes and Drums leading in those being installed.
Emergency Vehicle Driver Training

Youngsville Fire held an Emergency Vehicle Driver School in early April 2019. On April 6, 2019, drivers underwent this cone course to test and develop their skills to operate the department's fleet of emergency vehicles
Vehicle Versus a Tree

Youngsville Fire responded to a vehicle versus a tree on Timberlake Road on April 4, 2019. The occupants of the vehicle were treated by Franklin County EMS.
Head on Collision

Youngsville Fire responded to this head on collision, March 25, 2019 on Hill Road in Station 2's primary.  Upon arrival it was found that one occupant was trapped and required a door pop using the hydraulic spreaders. The occupants of the vehicles were treated by Franklin County EMS.
A-Shift Pitches In and Cleans Up the Roadway

Youngsville Fire A-Shift Engine 41 spent their Saturday, March 30, 2019 picking up trash along Cedar Creek Road. As firefighters our job is not just responding to emergencies, but pitching in to help our community in any way possible.
Barn Fire

Youngsville Fire responded with Engine 41 and Tanker 347 to this working commercial truck fire with extension to a car on March 24, 2019. The fire was quickly contained and the diesel fuel leaking from the burned fuel tank was dammed up and contained for clean up.
Woods Fire

Youngsville Fire responded with Engine 41, Engine 42, Brush 48, and with mutual aid from Franklinton (Franklin 6) on two woods/grass fires threatening structures on March 23. With spring quickly approaching, homeowners are encouraged to refrain from outdoor burning when it is windy.
Abandoned Residential Fire

Youngsville Fire responded with a full assignment to include mutual aid from Franklinton (Franklin 6) to this working structure fire on Cedar Creek Road on March 22. Engine 41 arrived on location and utilized the master stream to knock down the bulk of the fire while deploying a handline. The building was not occupied and the cause remains under investigation.
Shed Fire With Double Exposures

Youngsville Fire responded with a full assignment to include mutual aid from Franklinton (Franklin 6) to this working outbuilding fire on Holding Young Road on March 16. Two nearby homes sustained radiant heat damage but did not have any direct fire damage. Engine 41 arrived on location and deployed two handlines to extinguish the fire and to cool both exposures.
Residential Structure Fire

Youngsville Fire responded with a full assignment to include mutual aid from Franklinton (Franklin 6) to this working residence fire on Cedar Creek Road on March 4, 2019. Crews quickly knocked down the fire which was contained to the kitchen area of the home.
Junk Yard Fire

The 2018 YFD Annual Report is attached below:

Youngsville Firefighters responded to this early morning accident on US Highway 1 on February 10, 2019. The driver was treated by Franklin County EMS.
Large Working Woods Fire

Youngsville Firefighters responded to a woods fire behind Cedar Creek Middle School on February 8, 2019. Upon arrival, crews found two separate woods fires, the first in the woods behind Alcock Lane, and the second behind the parking lot of Cedar Creek Middle School. Low relative humidity and gusty winds aided fire spread. With two active fires that were separated by nearly a quarter of a mile in the woods, the incidents were split to operate separately. A second alarm was called which brought a brush truck from Franklinton and Bunn, and an additional tanker and brush truck from Youngsville Fire Station 2. Ultimately, the fire was contained using leaf blowers to cut a fire line.
Working Commercial Structure Fire

Youngsville Firefighters responded to a working commercial structure fire on NC 96 West on February 7, 2019. Crews found an auto shop with a burning car inside with extension to the contents of the shop and the roof. Engine 41 placed a 2" attack line in service and quickly brought the fire under control. Wake Forest Fire, Franklinton Fire, and Brassfield Fire provided mutual aid.
Working Residential Fire

​​  Dodge ball anyone?
Youngsville Firefighters conducted a PPE training on 1/28/19 using the old game of dodge ball to practice conserving air while operating under physical conditions. Firefighters had to answer a series of basic firefighting trivia when they were "out" to get back in the game.

Youngsville Fire units responded on 1/9/19 to a large woods fire on Moores Pond Road in the Station 2 district. Crews found a large outside fire with vehicles involved. YFD responded with 6 units to bring the fire under control.