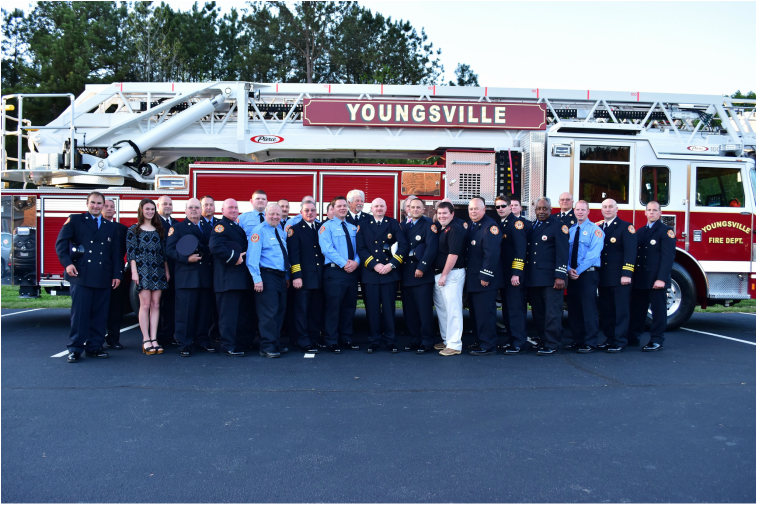 Jack Green Sr. was the first Fire Chief of the department and the first fire truck was a converted bus that only carried hose that was hooked directly to a fire hydrant in town to fight fires. The original fire station was in downtown Youngsville located on West Railroad Street. Later another truck was also housed in Wheeler's Garage on E. Main Street. There was an extra garage bay at the local mechanics shop that was loaned out to the fire department. A new station was built in 1964 located at 118 North Cross Street. This station was the fire station and town hall. The Youngsville Town Hall is still located there today.

By 1987 a second station was opened to assist with response to the far eastern side of the fire district in the Flat Rock Community. It was located at 1088 Hart Rd. This station was in use until late 2008, when construction of the new Station 2 on Flat Rock Church Rd was completed.

As the fire department grew, a new Station 1 was needed to replace the overcrowded station on North Cross Street. The new Station 1 was opened in 1994. It is located at 803 Wheaton Avenue and still serves as our main station today. Station 1 serves as the primary location where all training classes and meetings are held for the fire department. In November of 2001 two paid firefighters were added to assist with response during the day.

In 2006 Youngsville Fire Department was able to re-qualify with the Department of Insurance to help all the homeowners within 1000 ft. of a fire hydrant to lower their insurance class from a Class 7 to a Class 5 rating. In late 2008, to help with response to the far west side of our fire district, Station 3 was constructed. Station 3 is located off of NC 96 Highway across from the Old Liberty Golf Course Community.

In 2012, the fire department began providing first responder (EMT) services to the community to assist the growing demand for EMS care in the Youngsville community. The department responds to life threatening medical emergencies to assist Youngsville Rescue and EMS and Franklin County EMS.

In 2015, a ladder truck was added to the apparatus fleet to continue to assist with the community’s insurance rates while continuing to build the department’s capability to serve the community. Ladder 4 allows Youngsville firefighters to quickly and safely gain access to commercial buildings roofs as well as many other fire and rescue uses. Also in 2015, the full time career staff was moved to a 24 hour schedule at station 1 to assist with the growing call volume. During the daytime, the career staff is assisted by a part time firefighter and a career Captain. On the nights and weekends, the volunteer members assist the career members with staffing the station 1 engine. The combination of career and volunteer personnel has enabled Youngsville Fire Department to continue to move into the future while providing the community with the best possible emergency services.

In 2017, the Youngsville Fire Department became the first Franklin County Fire Department to hire a full time female career firefighter. Firefighter Lacie Evans, who had previously served as a volunteer firefighter was hired and assigned to Fire Station 1, C- Shift. Also in 2017, the department purchased a new E-One Rescue Pumper which was assigned to Station 1 as Engine 41. The previous Engine 41, a 1999 E-One Pumper that had at one time been Engine 46 was assigned to Station 2 as Squad 245. The department ran 1032 calls in 2017.

In 2018, the department underwent an ISO inspection by the North Carolina Department of Insurance and received an improved rating of a Class 4 rating in town, and a Class 4/9E outside of the town limits. Insurance Commissioner Mike Causey provided a press release and said "I'd like to congratulate Chief Lloyd for the department's performance and for the hard work of all the department members." As the community continues to experience growth and development, the needs of the fire department continues to expand. Noting that growth and increasing need, a career Battalion Fire Chief was hired by the Chiefs in the fall of 2018. Battalion Chief A.C. Rich will provide daily operational management of the career staff Monday through Friday.