December 28, 2016- Youngsville Fire responded with over 25 members including four engines, two tankers, a Squad, and two brush trucks along with mutual aid from Franklinton Fire, Bunn Fire, Wake Forest Fire, Stony Hill Fire, and Brassfield Fire to this structure/grass fire. Units arrived to find one barn fully involved in fire with two others on fire along with a grass fire that was threatening a house and another small barn. Crews made an aggressive attack and were able to save two of the three barns and kept the fire from reaching the house. No one was injured at this fire.

December 27, 2016- Engine 41, Engine 341, and Squad 45 responded with about 20 members and mutual aid from Brassfield Fire to this accident at John Mitchell Road and Sid Mitchell Road. Upon arrival, crews found two subjects pinned in a vehicle with four total patients. Franklin County EMS, Granville County EMS, and Youngsville Rescue transported the patients to the hospital.

December 16, 2016- Engine 41, Tanker 47, and Engine 342 responded to a working vehicle fire on Holden Road in Youngsville. The fire was quickly extinguished but the damage to the vehicle cause it to be a total loss. Units returned to service after cleaning up.

December 8, 2016- Engine 41 and Squad 45 responded to a reported vehicle into a building. Units found a pick up truck into the side of a building with one person trapped inside still. Units popped the door on the truck to get the driver out. EMS handled patient care. Units returned to service after making sure the building and scene was safe.

November 30, 2016- Squad 45 responded to Louisburg to assist with a well involved vehicle extrication. Squad 45 along with Louisburg fire worked to free the victims from the accident.

November 30, 2016- Youngsville fire responded to a multiple vehicle head on accident on Cedar Creek Rd near Hill Rd. Units arrived to find a two car MVA head on with injuries and subjects trapped. Patients where extricated from the vehile and patient care was handled by EMS on scene.

November 30, 2016- Youngsville responded and assisted Brassfield fire with multiple jobs including initail fire attack. Units worked together to extinguish multiple lawn mowers, a camper, and boat as well as stopping extension to an adjacent garage. 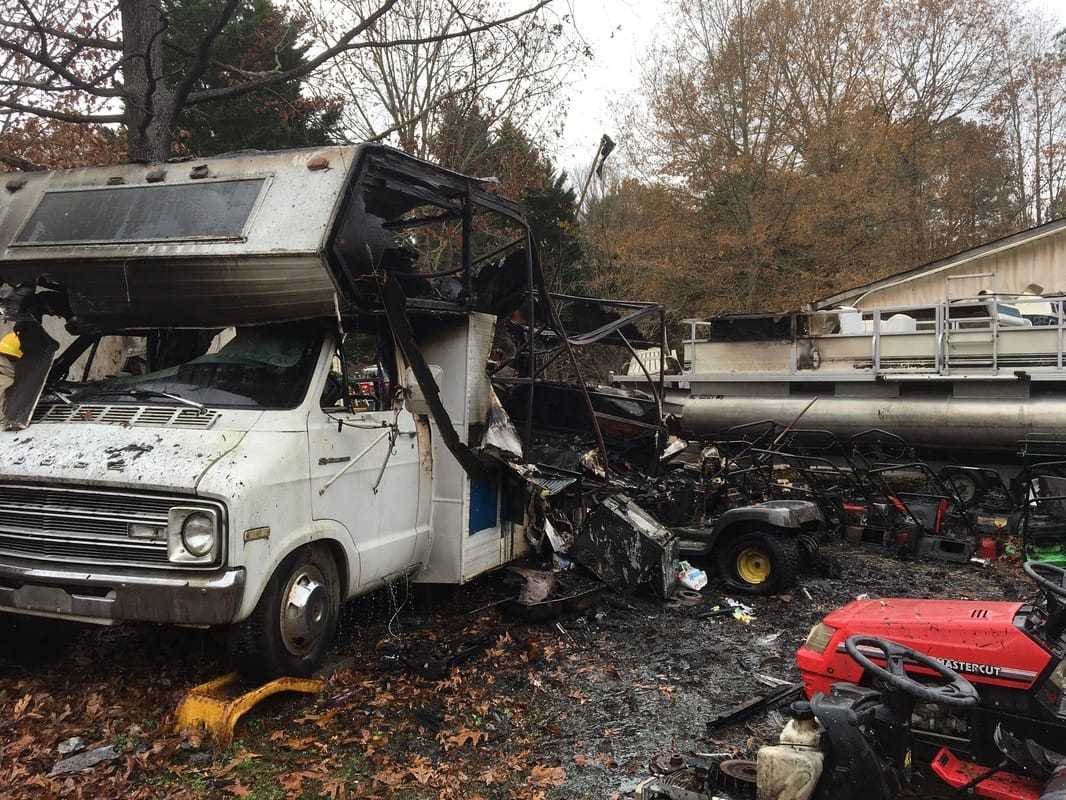 Dump Truck Rolls Over in Youngsville

November 21, 2016- Units responded to a reported MVA on Pocomoke Rd. Units arrived to find a dump truck that was loaded down with asphalt. The driver of the truck was removed through the windshield and injuries where treated. EMS transported the patient and the units worked to finish stabilize the scene before returning to service.

Brush Fire Turns out to be Working Structure Fire

November 12, 2016- Units from Youngsville Fire and Bunn Fire department worked to extinguish this structure fire in the Fox Ridge subdivision. No injuries were reported and the fire was quickly brought under control. 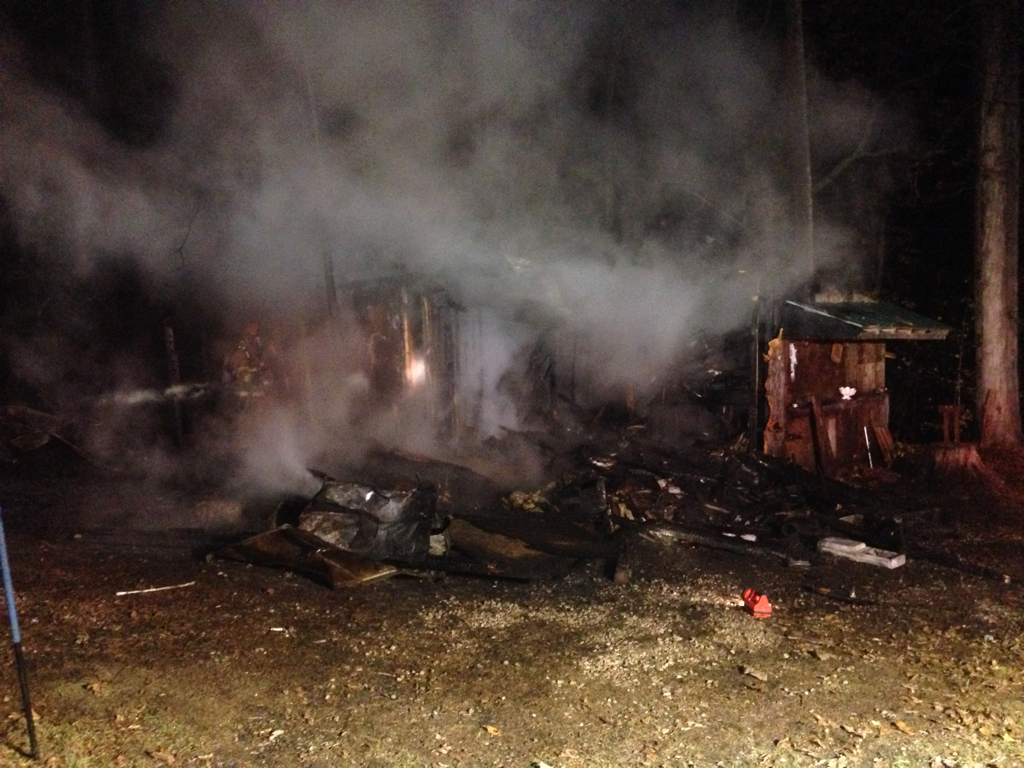 Two Vehicle Accident on US 1

November 11, 2016- Engine 41, Squad 45, and Engine 341 responded to this two car accident on US 1 that closed southbound US 1 for around an hour. Franklin County EMS transported the injured occupants of the vehicles to the hospital. 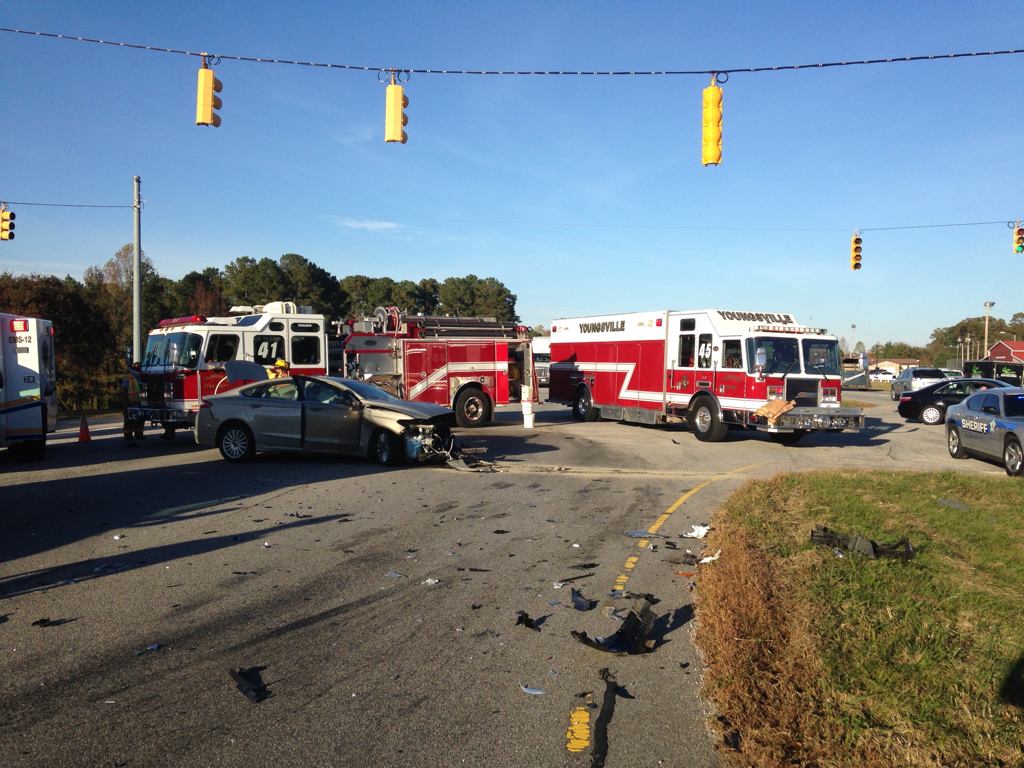 US 1 Hwy Vehicle Accident with Two Vehicles on Fire

October 31, 2016- Youngsville fire responded to a reported vehicle on fire on US 1 Hwy. Engine 41 arrived to find a MVA with injuries and two vehicles on fire. Units from all 3 stations assisted with the numerous tasks of controlling the fires, providing medical care and controlling traffic. Franklinton fire also responded mutual aid until the scene could be controlled. 3 EMS units where used to transport patients to nearby medical centers.

October 24, 2016- Youngsville fire along with mutual aid received the call for a possible fire in the living room. Engine 41 arrived first due with single family residence to find a confirmed fire in the living room and smoke showing. Youngsville Firefighters assisted by Wake Forest, Franklinton, and Brassfield quickly extinguished the blaze and worked to save the resident's property. 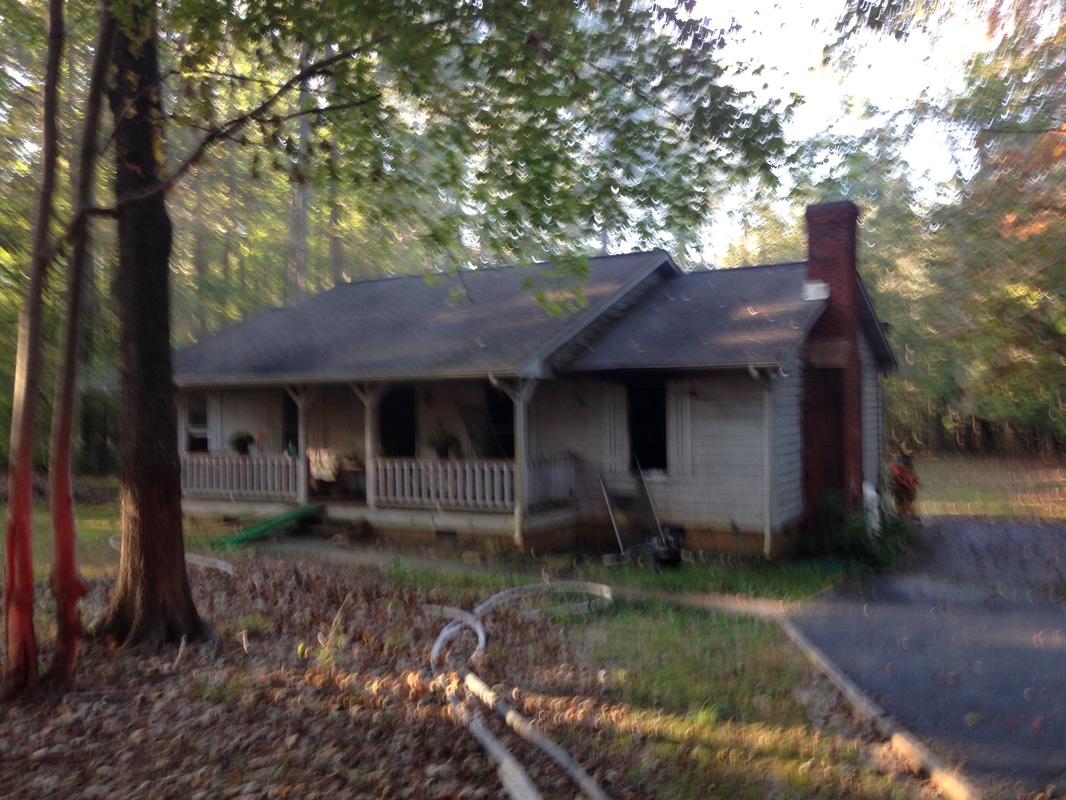 October 23, 2016- Youngsville Firefighters responded twice on Sunday and worked to extinguish a commercial dumpster fire off Cross Street. The dumpster had rubber manufacturing debris which had hardened making it difficult to fully extinguish.

Vehicle vs Pole on Tarboro Rd

October 21, 2016- Friday morning wreck just after midnight brought Engine 41, Engine 241, and Squad 45 to this serious accident on Tarboro Road. The vehicle left the roadway and struck a power pole causing the pole to snap in half. The vehicle was cut in half from the impact and the driver was treated by Youngsville Rescue Squad and Franklin County EMS. Power was knocked out to many in the area from the power lines being down.

September 29, 2016- Engine 241 responded to a vehicle in a creek on Highway 401. The driver was able to get out of the vehicle and swim to safety without any injuries. 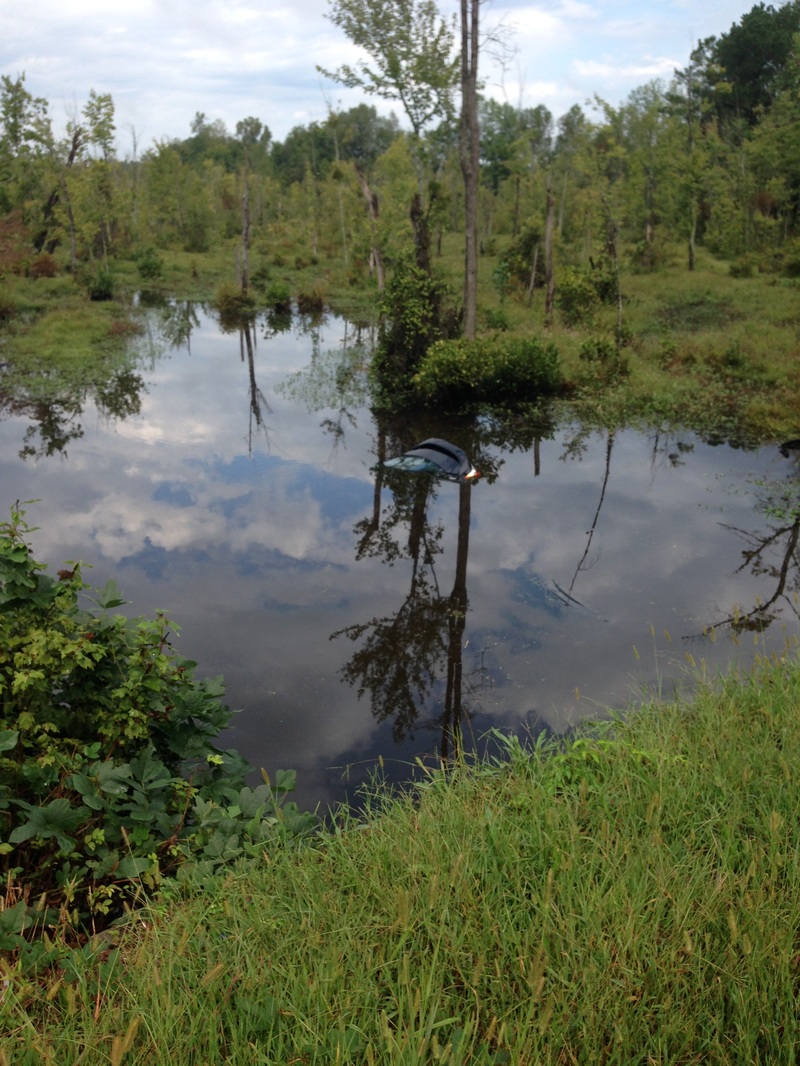 House Fire off 401 Hwy in Youngsville

September 11, 2016- Six fire department units and 24 firefighters responded to this early morning residential structure fire off Highway 401. The house was well involved on arrival of the first units. No one was injured and the fire was brought under control in about an hour. 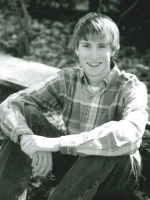 The son of Jennifer DeEtte Lloyd of Louisburg, NC passed away on Monday August 15, 2016. Justin brought laughter everywhere he went and his humor was unlike any. Even though his health declined over the past several years, he always had a positive outlook. Never a complainer, he always said he “felt good, can’t complain.”
Justin will be terribly missed by the people he knew so very well, but by those he knew through social media, because they were CF patients in other states or countries around the world. He was always comparing CF stories with them to see what medicines or techniques were being used in other places. He loved to research everything CF and to make sure he was getting whatever the newest and best treatments were available.
Being a volunteer fireman for the Youngsville Volunteer Fire Department, he was recently made an Honorary Lifetime Member of the YVFD. He loved being a part of the fire department and helping in the community.
Justin was also an avid animal lover. Animals of all kinds, but especially dogs. His Siberian Husky Luna is the pride of his heart. She is truly his best friend and he loved taking her everywhere with him so everyone could see how beautiful and smart she was.
Justin touched so many people with this kind words, sympathic understanding, and his positive attitude towards life. He was a member of Flat Rock Baptist Church and was active in the church and community when his health permitted. The family will be accepting friends and visitors at Justin’s home.
The family would like to thank everyone that visited, called, emailed, sent cards and/or food during the times when he was hospitalized over the past several years. Your continued love and support has meant the world to us and we ask for your continued prayers, and support in the coming days.
Predeceased by his mother, Jennifer Dette Lloyd, great-grandparents Haywood and Stella Wiggins and George Thomas Lloyd.
Survived by grandmother Ann Stacy Lloyd, aunt and uncle Mike and Janet White, cousins Shane and Kevin. Grandparents Tommie and Jennie Lloyd (mom and dad), uncles, Ricky Wiggins and Guy Wiggins and wife Debby, cousins Megan Wiggins, and Brandon Wiggins and wife Rebecca, cousin Ada.
A funeral service honoring his life will be held at 2 o’clock Thursday afternoon August 18, 2016 at Flat Rock Baptist Church with Rev. Gary McNair officiating. Burial will follow in the church cemetery.
In lieu of flowers memorial contributions may be made to the Youngsville Fire Department P.O. Box 164 Youngsville, NC 27596 or to the Franklin County Humane Society P.O. Box 338 Youngsville, NC 27596.

Units Respond to Vehicle in the Woods

August 15, 2016- Engine 41 and Squad 45 responded to a single vehicle accident on Green Road. The driver was transported to the hospital with minor injuries and the vehicle was secured. All Youngsville fire units returned to quarters after about an hour. 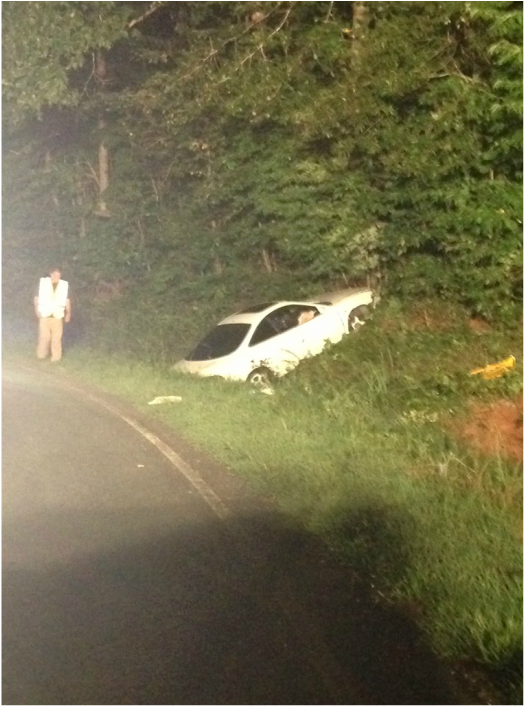 August 8, 2016- Engine 41 attended the national night out event in the Glen Oaks subdivision. The children at the event gave the fire department cards and a fruit basket after enjoying the fire truck. It was a great community event. 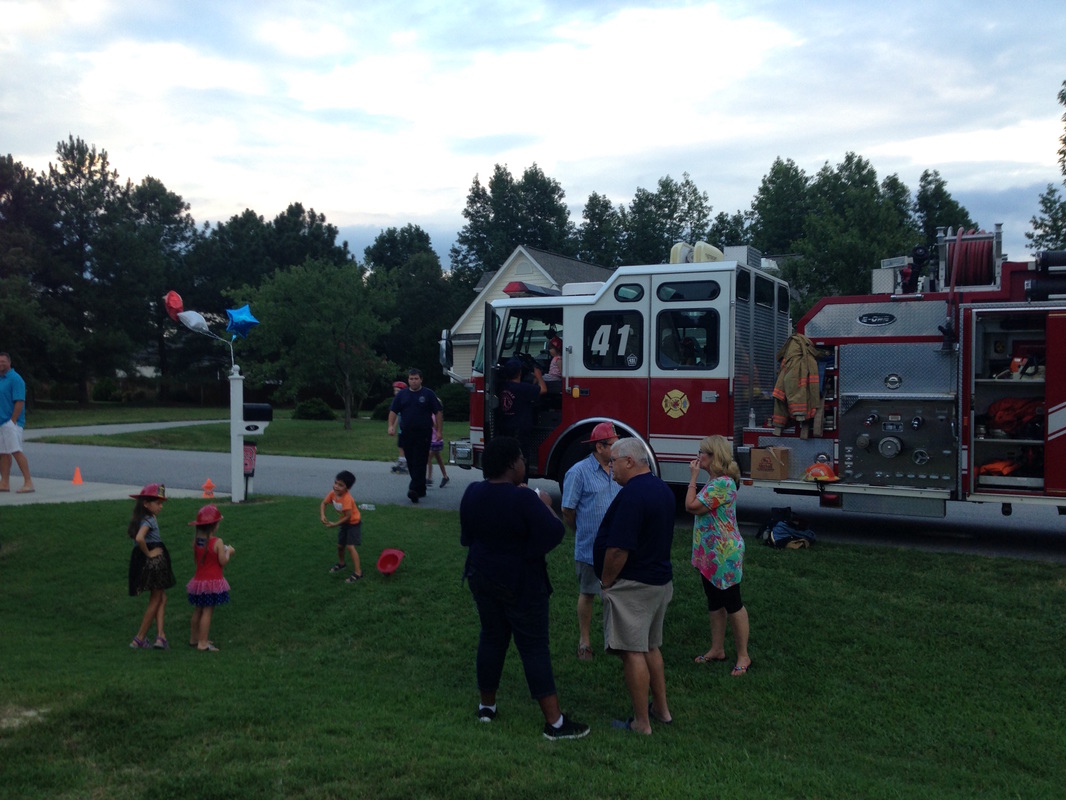 July 18, 2016- Congratulations to Harrison Lancaster on receiving the first scholarship in Assistant Chief Jeff Fields' memory. The Jeff L. Fields Memorial Scholarship is awarded to aide the recipient in pursuing a higher education in the fire service. Harrison was presented the award at this month's business meeting. The Fields family presented the award to Harrison and his parents.

Chief Fields was a life long community servant with service in the United States Marine Corps and in the Youngsville community. Chief Fields was lost in the line of duty on December 25, 2013 following a cardiac event. His memory lives on through this scholarship and in the many lessons he delivered through his leadership by example.

Only a few hours after picking up from a working residential fire in Franklinton, YFD was on scene of a working detached workshop fire sparked by a lightning strike. Crews found fire running the ridge of the roof and opened up the roof using a saw to access the fire. The fire was quickly contained and the contents of the building thats used as an art studio were protected using tarps.

July 8, 2016- Engine 41 and several volunteers responded to this mid day vehicle fire in downtown Youngsville. The vehicle was carrying pine straw which caught fire. The fire was quickly extinguished.

June 21, 2016- Engine 341, 342, 241, and Squad 45 along with mutual aid from Franklinton Fire responded to this gas leak inside a single family residence. Crews secured the utilities and used a gas meter to monitor the home's atmosphere. The house was ventilated and turned back over to the homeowner. 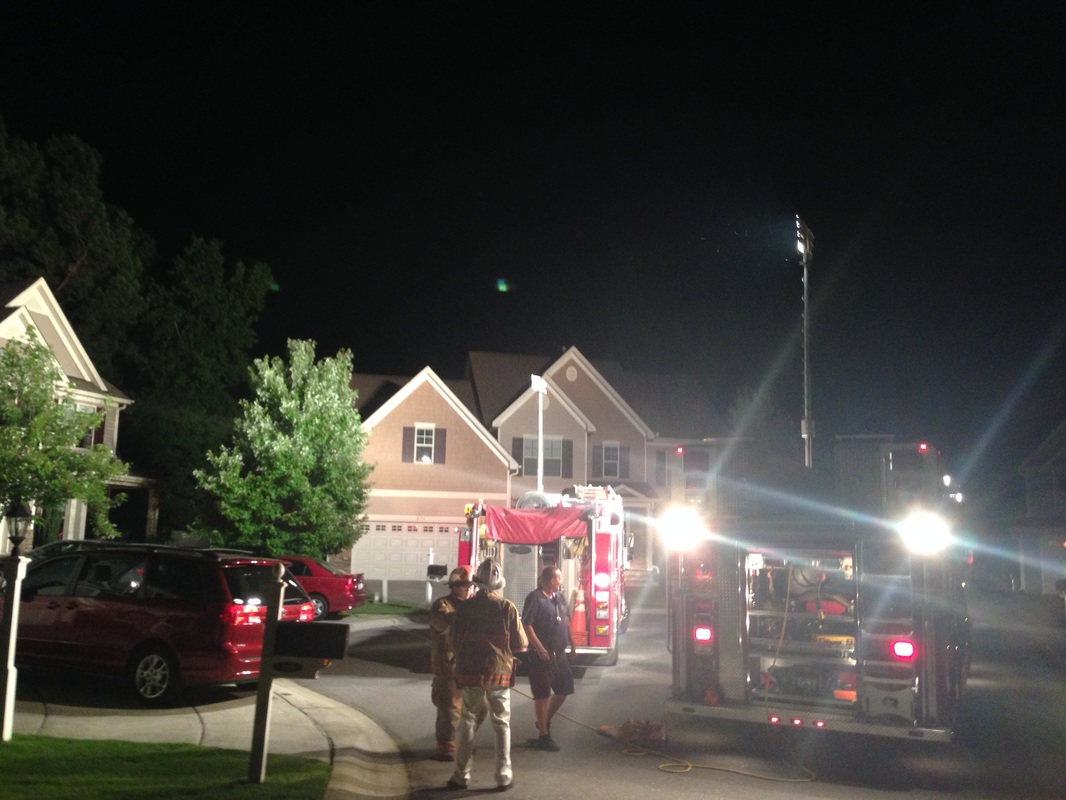 MVA with Entrapment on Holden Rd

June 18, 2016- Engine 341 and Squad 45 responded to a vehicle accident with a trapped driver on Holden Road. Crews used hurst tools to free the driver from the vehicle.

June 4, 2016- Jeep catches fire on Main Street in town. Engine 41 and Tanker 47 responded on the call and handled the fire. 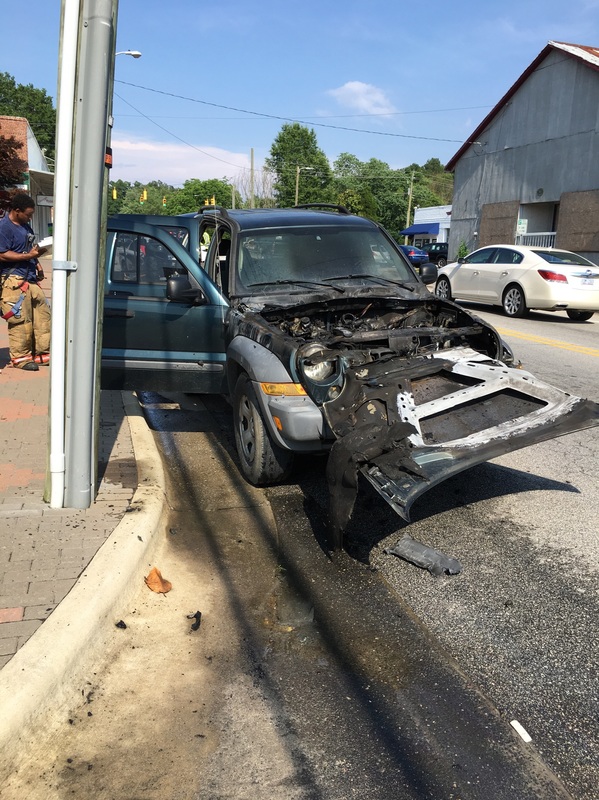 May 23, 2016- Youngsville fire responded to a single vehicle accident with no injuries. Units on scene secured the vehicle, checked on passengers and blocked the road for safety.

May 11, 2016- East Main Street was closed in Downtown Youngsville for 2 hours after a tractor trailer took down a power line to a group of businesses. The line was energized, requiring that traffic be re-routed through town. Engine 41 responded with assistance from Youngsville Police and NCSHP. 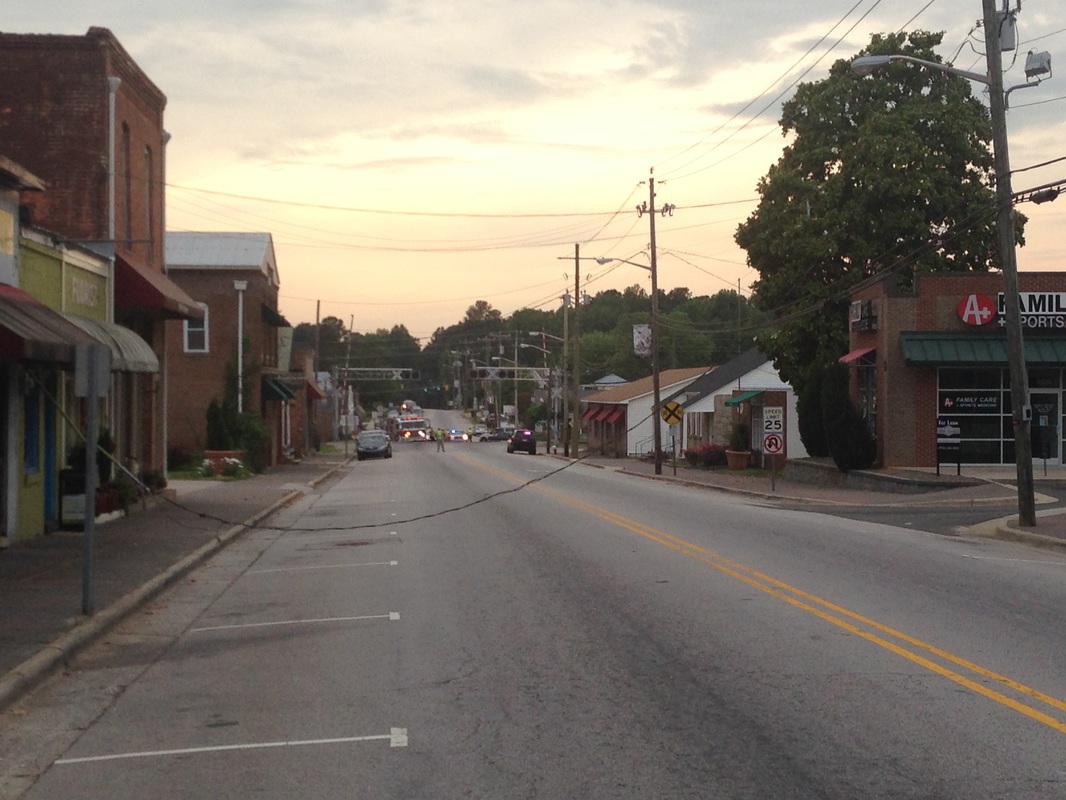 Vehicle Accident Overturned with no Driver

May 7, 2016- Single vehicle motor vehicle accident. Driver left the scene before fire units arrived.  Waited for Police and EMS before clearing the scene.

April 17, 2016- Units from Youngsville and Bunn received a call for a possible structure fire. Upon arrival units found a single family house with fire showing from the chimney. Engine 41 was the first arriving engine and advanced a hose line to the roof in case of extension. After further investigation it was found that the fire was contained to the chimney. The chimney nozzle was used to extinguish the fire from above. Units inside opened up and extinguished the remainder of fire. All units picked up and returned to service within a hour.

346 gets new home in Georgia

​Engine 346 was sold to the Rock Hill, Georgia Volunteer Fire Department for $1.00. They are a department in need. Engine 346 will serve as a first out Engine for their department to protect their large rural community. 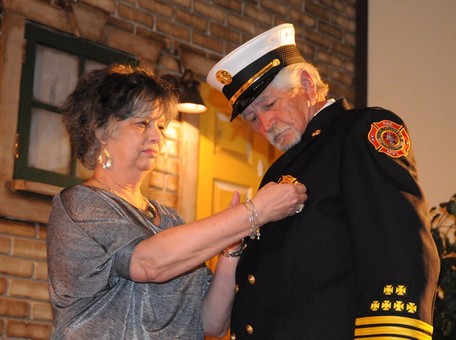 On April 2, 2016 Youngsville Fire Department held its first installation ceremony. The ceremony took place at the Faith Baptist Church in Youngsville. For more information on this event please see the links below.

To read more please see the full article from the Wake Weekly. http://www.wakeweekly.com/youngsville-installs-officers-firefighters/

Special thanks to Lee Wilson for providing photography of the event.